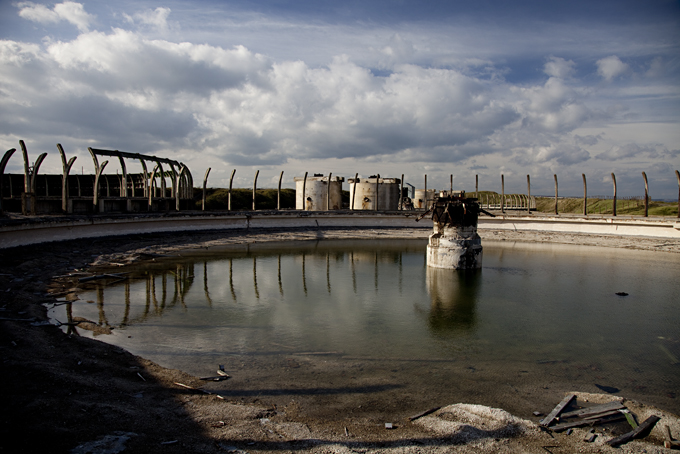 Don’t be seduced by the seaside shades of blue, the turquoise water, the poetic sky. This could be the inside of a dead whale carcass, somewhere in between Apocalypse Now and Bladerunner, or this could indeed be Hell’s teeth. I’d always wondered, looking at the chimney pot which stands on the same site and looks like a gigantic cigarette, how you got up to the place. I spent more than a year in the area doing my photography degree and still hadn’t been to have a look.  Towards the end of my course I did manage to find the road up to Steetley, which I’ve realised is one of the other entrances, via a graveyard by the ocean front. On that occasion, I pulled my car right into the rubble, over many huge potholes, which my car still hates me for. That day, I felt an instant unease about the place, to the point of feeling a bit sick. I got out of my car, locked the doors, then locked them again. I probably walked about ten yards then went back to see if the doors were locked. I had a strange feeling I was being watched even though I couldn’t see anybody else. A huge derelict Magnesium production plant, so eerie, it sent my mind into overdrive. I shuffled about in the rubble for about ten minutes, wondering where the good bits were; the photographs others had taken didn’t look like what I was seeing. I took some photographs of dumped TV’s and rubbish, barbed wire and other discarded waste. I quite like taking shots of that kind of stuff anyway so I was, if only for short bursts and in between looking over my shoulder, quite content snapping away. Just as I was making my way closer to the giant chimney, this huge man came bouldering across a big pile of rubble behind where I was heading. He had the frame of Robbie Coltrane, and was wearing a long black cloak. How odd, I thought, was this man. Weekday, wearing a Darth Vader outfit, trampling about on piles of rubble. He didn’t have a camera that I could see, anyway. I wasn’t going to hang around to introduce myself, I must have moved faster than a rat up a spout. I was in my car and out of there like a shot, over the potholes, sod the suspension.

That’s probably a year ago now, and ever since then, weekly, I’ve thought about going back up there. The plan was to drag a man along with me, that way I wouldn’t have to have that sinking feeling again, like I was about to raped or worse. That probably sounds very over dramatic, but that’s just how the place made me feel. Like I was going to go in there, and never be seen again. Promises of joint expeditions have never been my thing really, purely because they rarely happen when I’m raring to go. If I was to wait, I reckoned, for my bodyguard to accompany me, I’ll turn up there and be looking at a bunch of seaside luxury apartments where the pit of Hell used to be.  So, this morning, Captain decided that today was going to be Hell’s Teeth revisited day, come what may.

The car was clanking down the A19, just to rub it in. Don’t know what’s wrong with the ol’ lass, but potholing wouldn’t be a good idea in her at the moment. I was working it out in my head on the way North, that when I got there, I was going to play detective and find another way into the bowels. I got to Hart village, and circumnavigated several times, I could see the tunnel where I knew I had to be, but nothing but double yellow lines everywhere I looked. I ended up parking outside someone’s house, more nervously excited about going to Hell than caring about whether I was allowed to park there or not, I got out and made a dash for it. 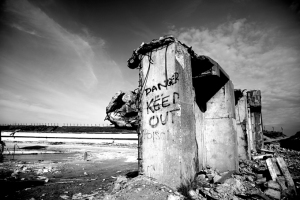 Shut up mind. Be quiet. There’s nothing down this here tunnel that can possibly harm me. I didn’t like the look of the tunnel, and I could see what looked like a burned out 4 X 4 with people hanging around at the other end. I marched on. I purposely dressed down for the occasion. Many layers, and a big puffa jacket, to give the illusion that I shouldn’t be messed with, even sporting a camouflage hat. Nothing though, will even conceal my sparrow’s kneecaps. I’m not sure how unconvincing I looked, but I was halfway through the tunnel by this point, up for it and not turning back. Immediately at the other end of the tunnel were three kids, probably no older than ten years. They were playing in the probably stolen, now dumped Nissan four track. They all stared at me with wild eyed as I walked past, I know they were only babies really, but that didn’t help my anxiety. I was only about five meters away from them, and this must have been what they were waiting for, a roaring blast went off. I nearly jumped out of my wellies, looked back over my shoulder to see a big plume of smoke. I’m not sure what they were exploding, but wouldn’t surprise me if it was the inside contents of shot cartridges. Sweet little children.

I was consumed by what I could see in front of me now. This is what I was looking for, this is what I hoped to find. This is what I came to see. Gingerly pulling my camera out of its case, ever since I got it I have terrible visions of someone riding round a corner and tugging it off my arm and doing a runner. If anyone was ever going to do that, I’d imagine it to happen in a place like this. Just as I was fumbling around, a man wearing what looked like a floral nighty, squeaked past me on a ladies Raleigh shopper bicycle with a basket on the front. He was looking over his shoulder at me and not looking at where he was going, bouncing as he went over the uneven dusty ground. It’s a wonder he didn’t fall off the speed he wasn’t going. In a town renowned for never really having moved on since the days of nylon tracksuits, the frock threw me a bit. He stopped over by the 4 X 4 and where the kids were setting fire to things. I didn’t want to stare too much, so I set about doing what I went there for in the first place. The next time I looked around, the bike was thrown on the floor behind the jeep, and he was nowhere to be seen. 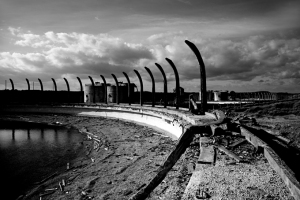 I set off to explore. What an explosion of emotions within the place. I was scared. I admit it. There’s something dreadful about that place, and I’m not sure what it is. It has such a repulsive vibe about it. I felt sick and shaky just like it did the first time. I’m not even sure if I’d really feel any better if I did have a friend there with me or not. I’m hesitant to guess what’s gone on there in the past, but I hope that wasn’t reflected in my reaction to the place. I made my way up to the first of the storage pools, now half filled with water. The place was littered with fallen debris and was mostly structurally unsafe. I climbed up on to the top of the rim of the pool and walked around it. Checking my back all the time, the whole place echoed. Being scared of your own footsteps took on a whole new concept. I climbed off that pool, looked up above me and really grasped how huge the whole site was. In front of me there was an escalated pile of rubble, which I guessed at the top there was another concrete pool. I clambered up the rocks. Half way up the rubble, my bloody mobile phone went off, I nearly had a heart attack. I was so engrossed in what I was doing; any little intrusion on my senses sent me skywards. T-Mobile, you can now access your mobile phone bill for this month online. Fuck off. There was another pool at the top, with a rotten metal shed suspended in the air in the middle of it, corroded, rusted, dilapidated. It reminded me of when I went to Universal Pictures in LA, one of the movie sets they had. My heart was pumping like a freight train by this point. Take your photos and get out of here. Get your shots and get out. I spent about another fifteen minutes snapping away. I made my way down onto one of the lower rims of another pool, and inched my way around the edge of it knowing that the tunnel I’d got in through was over in that direction somewhere. But then, I freaked myself out. I think it must have been the echoes, but I’m not sure. I was going to jump off the ridge onto the ground, which was easy enough it was only six feet or something like, but not before I’d checked every nook and cranny on the ground below me from the air, being on the upper level I was on I could do that, before I did jump. All clear. Down I went. I managed to shoot a few more shots before I left, on the way out. To be honest, if anyone was watching, I probably inched it out of there pretty sharpish. I was disappointed I didn’t have someone else there, the weather was perfect for my kind of shots, and I did want to stay as much as I wanted to leave. I walked past the burned out car, now just one child in the driver seat, riving about with the wheel like he was in some sort of a stationary getaway. The burning traffic cone was still smouldering on my left side, with the remnants of the gunpowder on the ground from the big bang. For some strange reason I felt it necessary to hold my phone to my ear on the way through the tunnel, giving the impression that I was on the phone to the gaffa. ‘Got what we came for chief. No Messing about. I’m outta here’.

As I sat down in my car, which had neither been clamped nor robbed, I said my words out loud. This isn’t a new thing of course; I talk to myself out loud all the time. ‘Thank fuck for that’, I said, giving a quick double fist of glory into the air. I might have even punched the air twice, and given a quick ‘You talkin’ to me?’. Then I quickly whirred through my shots. Not bad. Could be better. I’ll be back, but next time I’m wearing my Darth Vader outfit, and I will use the force…

Captain over and out…